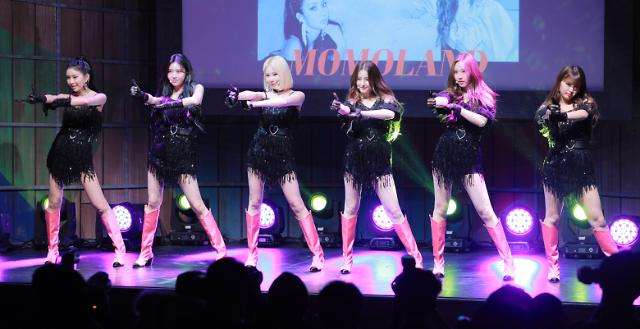 Momoland performs at a showcase event on December 30. [Photo by Yoo Dae-gil dbeorlf123@ajunews.com]

SEOUL – Dressed in sparkly short black dresses, gloves and long pink boots to give it a retro look, Momoland returned with a Newtro dance song that used brass to create a funky atmosphere. This marked Momoland’s first comeback as a six-member group.

“We wanted to give it a different feeling from the previous songs because six people are on stage for the first time,” Nayun said at a showcase event on December 30, when the girls released “Thumbs Up” which marked their debut. single album in nine. month.

For their comeback title song, also called “Thumbs Up,” they donned retro and mature stage costumes. Despite the absence of Yeonwoo, Taeha and Daisy, the girls said that they did their best to meet the fans’ expectations with perfect performances.

“Even though the membership has gone down, I still felt I needed to energize the fans on stage,” said JooE. “There was some difficulty after being reorganized into a six-member group, but the members practiced and talked for a long time and held on. As a result, we were able to play perfectly.

Momoland was formed by MLD Entertainment through a reality show that selected seven finalists. After their debut on November 10, 2016, the girls added two members. In August 2018, the group obtained Platinum certification by Gaon Music Chart for over 100 million streams for “Bboom Bboom”.

“I was very nervous because I felt I was going to redo my debut,” said Hyebin, expressing his wish that the reformed group received “a sincere, not obvious compliment.”

© Aju Business Daily & www.ajunews.com Copyright: All material on this site may not be reproduced, distributed, transmitted, posted, published or broadcast without permission of Aju News Corporation.