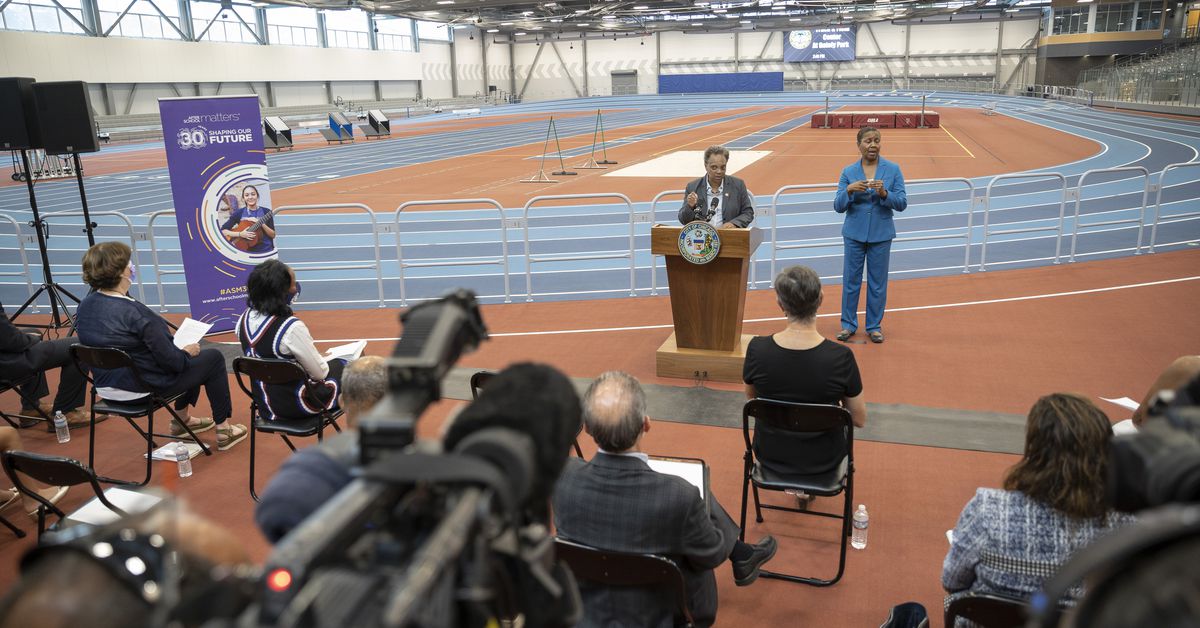 By: Renee J. Williams
In: Dance art
With: 0 Comments

South Side student-athletes now have a new sports facility where they can train.

Mayor Lori Lightfoot cut the ribbon on Tuesday for a new indoor track at Gately Park in Pullman.

The 139,000 square foot facility at 10201 S. Cottage Grove Ave. will also serve as the new flagship site for After School Matters, the nonprofit group that hosts programs for students in grades 8 to 12 at the Gately Park site and two other locations.

Joyce Chapman, chair of the Gately Park Advisory Council, said the installation was “length ahead for the Far South Side.”

After School Matters and the Chicago Park District announced the project in 2018, according to CEO Mary Ellen Caron. It was scheduled to open last year but was delayed by the pandemic.

Tuesday was the first day of programs at the new facility, which seats 3,500 spectators and, said Lightfoot, “will put Chicago on par with New York and Boston” in the track and field championships.

“I never want to hear again that no one comes to Chicago looking for track talent because we have it in abundance,” said Lightfoot.

The building is named after Conrad Worrill, a longtime University of Northeastern Illinois professor who died last year. Worrill, a high school runner, had long called for an indoor track, so that today’s student-athletes could train all year round despite the harsh Chicago winters.

“He was a runner at Hyde Park High School 50 years ago, and he had to run in the halls of the school” because there was no indoor track, Caron said.

With the new track, Chapman said Chicago could “build our new Olympian.”

But there is more than the trail. The After School Matters wing of the building features art and dance studios, music rooms, culinary spaces, tech labs, and a two-story rooftop garden.

Although the program has served more than 350,000 participants in its 30-year history, Caron said this summer is the largest class to date, with 14,000 students.

One is Danny Barksdale, 16, in the Les Enfants dance program. He can see his school building across the street, although even observed during three years of construction he didn’t know what it was going to be.

“When I heard it was for After School Matters, it made me smile,” Danny said. “We finally have an opportunity where we don’t have to travel far just to do what we love. We can be safe and enjoy other activities.

16-year-old Destynee Smith has been participating in another After School Matters dance program for the past five years, Forward Momentum Chicago. She hopes to see the facility used by other youth teams in the city.

“After School Matters (helps) reduce violence and get a lot of kids off the streets, have something to do with their days and brighten up their daily lives,” she said.

Cheyanne M. Daniels is a reporter for the Chicago Sun-Times via Report for America, a non-profit journalism program that aims to strengthen newspaper coverage in communities on the south and west sides.