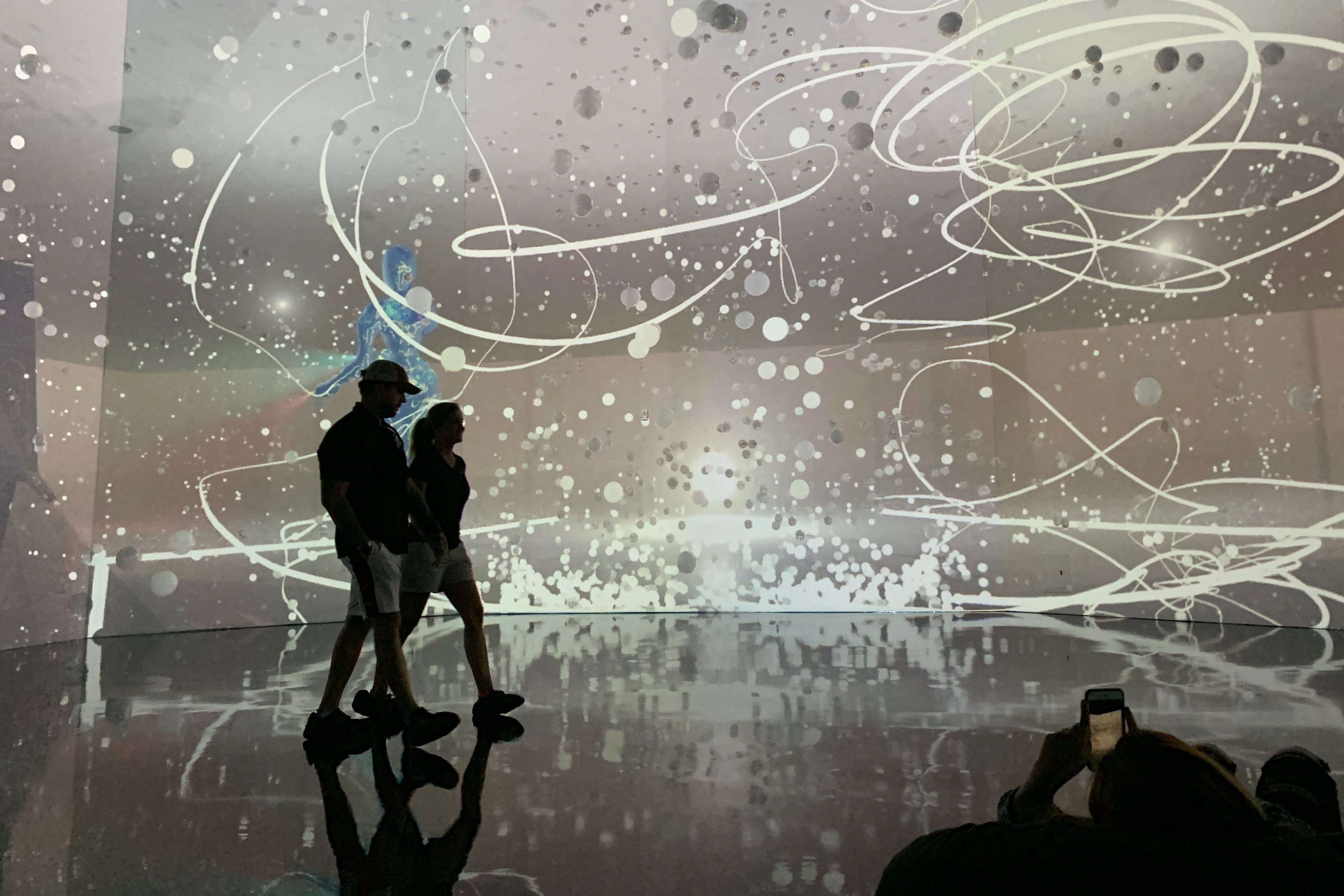 When I imagine a dance, I imagine a group of synchronized dancers, all moving together in a fluid motion. There are always people – or at least one person. How can you release emotion through dance, without people dancing on a stage?

ARTECHOUSE showed me exactly how this weekend.

On Saturday, the immersive museum opened “Lucid Motion,” an exhibition by Japanese artist group Daito Manabe x Rhizomatiks Research. The exhibition explores human movement – mainly dance – driven by technology. Like many other exhibits at ARTECHOUSE, “Lucid Motion” is interactive and encourages audiences not only to watch, but to participate.

I love visiting ARTECHOUSE, mainly because the exhibits are extremely strange. The moment I walked into her spacious main room on Saturday, I knew I was going to experience something different. A figure resembling an alien danced across the giant screen. It was blue, then black, then several different colors. As her hands moved, she traced lines around the screen with her movements.

There were several characters, sometimes, all doing the same dance. It was a beautiful, fluid spectacle. The literally larger-than-life dancer was rooted in the movements of an actual woman, which the artist studied. Even though I knew the image was just a screen, it had so much depth. The dancing figure looked so real, I thought I could reach out and touch it.

In the side rooms there were smaller but interactive works of art. In the “media lab,” guests were given an iPad to use as they walked around. Each station had a work of art, and when someone held the iPad, a figure would appear on the screen and dance above or around the station. It was fun to play with, especially since each dance was different and each figure popped up like a little surprise.

There were also giant screens in the side rooms that reflected the movements I was making and projected them onto the wall. It made me feel like that same larger-than-life dancer from the main exhibition hall. (I always wanted to be a dancer but never had the grace or the talent, so it was a real moment for me.)

My only criticism of the exhibit was that it was not as large as I expected. There wasn’t as much to look at as on my last visit to ARTECHOUSE. But, the advantage of the smaller scale was that it made me think more of the art I saw – and I probably could have watched the dancing alien lady hundreds of times before she got old. .

Colors, shapes and lines bounced around the main screen throughout his performance. All the balls and lines during the performance strangely reminded me of the universe. The bright, scattered dots looked like shooting stars.

Sitting on one of ARTECHOUSE’s bean bags on the floor, watching the techno-performance with ambient music in my ears, I asked myself: What is art? What is dance? What I was watching did not match my interpretations of art or dance. But, I really enjoyed it. The cosmic dance was a beautiful display of moving art.

“Lucid Motion” will be showing at ARTECHOUSE until December 1st. The exhibition pushes boundaries and inspires viewers to re-evaluate their own definitions of dance. Technology-driven performances and exhibits are an evolving art frontier, and I’m excited to see how far artists can go.

2019-09-29
Previous Post: Ishkur’s Definitive Guide to the Dance Genre Gets its First Update in 18 Years | Billboard
Next Post: Opening of a new dance studio in Scunthorpe for people of all ages